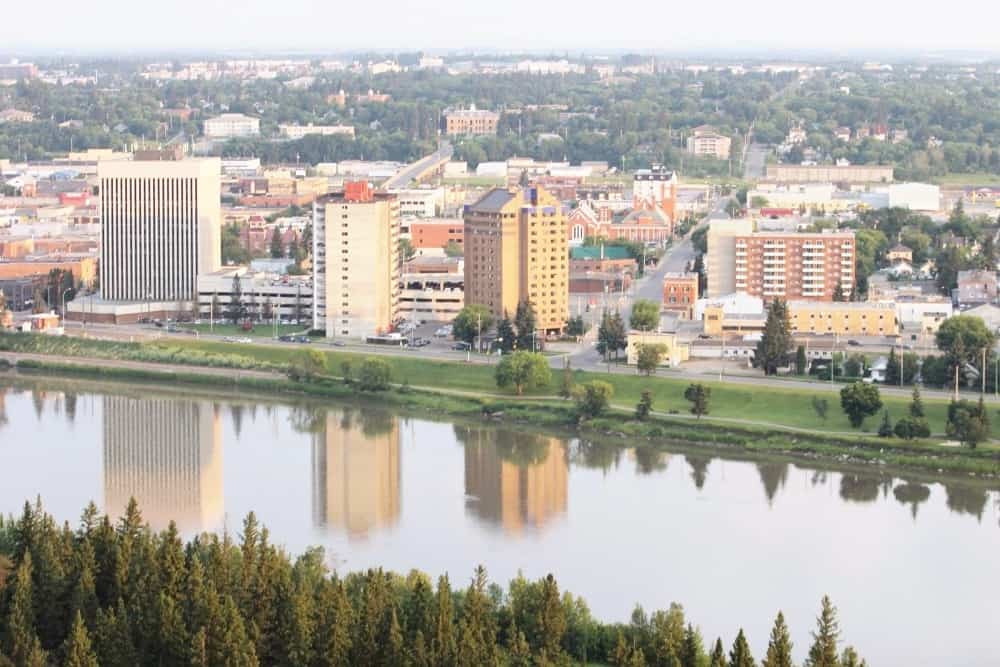 Prince Albert is the 3rd largest city in Saskatchewan with a population of 39,737. Located in the broad valley of the North Saskatchewan River, near the geographical center of the province where the agricultural prairie of the south and the rich forest belt of the north meet. Highways 2, 11, 55, 302 and 3 all connect in Prince Albert.

Much of Prince Albert is built on the sloping south bank of the North Saskatchewan River while the north bank provides a spectacular view of mixed forest, typical of northern Saskatchewan. Just at the doorstep of Prince Albert is 80 million acres of wilderness, and one hundred thousand sparkling, sapphire lakes and streams. We are located on the edge of the great Precambrian Shield that extends north to the Arctic Circle.

Just minutes away is one of North America’s last great escapes and natural treasures ¿ the Prince Albert National Park. Prince Albert functions as a service, retail and distribution centre for northern Saskatchewan’s resource industries – mining, forestry and agriculture. It is anticipated that this function will continually be enhanced by increased northern resource development. A well developed highway system links Prince Albert with surrounding areas. The City is also the focal point for Northern Saskatchewan’s railway network.

Settled by the First Nations, the fur traders and pioneers, the spirited history of the City does not lie forgotten. During 1691-92, explorer Henry Kelsey visited the area that was to become Prince Albert, but it was more than a century later when the man honored as being the founder of the City arrived. Reverend James Nisbet landed at the foot of what is now Central Avenue on July 26, 1866 along the south bank of the North Saskatchewan River.

Nisbet then proclaimed that the settlement would be named after Prince Albert, the Prince Consort to Queen Victoria. James Nisbet was a Scot who came to Canada at an early age, graduated from Knox College in Toronto and was called west by the Presbyterian Church in 1862. Physically hardy, skilled from his youth in carpentry and possessing some experience in farming, Nisbet was well fitted to be both pioneer and missionary.

By the habitation of Nisbet and his party, the evolution from settlement to City began. In 1885, the first municipal election took place with Thomas McKay becoming Prince Albert’s first mayor. It was also in this year that the community was incorporated as a town. The first train arrived from Regina in 1890 and a small station was built near what is presently known as 3rd Avenue West.

Prince Albert was now a part of the outside world and the days of isolation were over. The early 1900’s brought rapid growth to the community due to an influx of settlers into the remaining unoccupied agricultural lands surrounding Prince Albert and the establishment of a viable lumber industry. In 1904, Prince Albert was incorporated as a City and by 1911 the City had quadrupled in acreage. Further annexation in 1912 established boundaries which were virtually unchanged until 1966.

The vigorous growth of the post-war era reflected the general prosperity of the province’s economy. The City became a sales and service centre to the agricultural communities surrounding it. The forest industry became the 2nd most important industry with the development of the Pulp Mill in 1968. Numerous uranium and gold discoveries in the 1970’s and 80’s increased employment and stimulated Northern Saskatchewan’s economy.

A 2004 KPMG Competitive Alternatives Study researched 17 industry operations in 11 countries, which covered 121 cities and found Prince Albert ranked overall first in the mid-west with an index score of 87.6. The 2004 survey ranked Prince Albert as #5 in the entire world for overall measurement of cost competitiveness, which is up from #13 in the 2002 survey.

Weyerhaeuser Canada employs over 500 people in the region with the benefit of various spin-off companies such as trucking, sawmills, etc. In addition, Prince Albert is home to the new Saskatchewan Forest Centre currently being constructed in the downtown core. The region also enjoys a varied agriculture sector. Cereal crops are the primary crops grown in the area with some diversification into canola, peas, sunflowers and flax. Livestock herds are also diverse with herds in bison, elk, white tail deer, wild boar and a variety of other unique animals.

There is much excitement and anticipation surrounding the promising ongoing diamond exploration in the region, with Prince Albert being the closest large service center in the area. With much experience in being the service provider to the existing mines in the North, Prince Albert is looking forward to expanding its capacity to include the diamond sector.

Attractions of the Prince Albert city

Prince Albert is a four-season destination. For the summer months, there is the Kinsmen Water Slide Park, several hiking trails, biking trails, fishing, camping, boating, touring and a choice of 20 golf courses within 60 minutes of Prince Albert. For the winter months, enjoy the groomed snowmobile trails, cross-country ski trails, down-hill skiing, fishing, and more. In fact, Prince Albert has the most ice rinks per capita in Canada. The City is home to the largest winter festival in Western Canada.

This celebration lasts for two weeks in mid-winter. The Festival Activities include the Canadian Challenge Sled Dog Races, an international event starting in downtown Prince Albert to La Ronge and back, a 530 km race with a purse of over $30,000.00. There are various other festivals that occur such as Fine Arts festivals, Theatre Productions from the many local performing arts companies, huge craft and trade shows, children’s festivals, Metis Fall Festival, Dance Festivals, Canadian 9-ball Championships, Canadian National fast-ball and soft-ball tournaments.

Prince Albert and area boasts of a very talented arts community. The new E.A. Rawlinson Centre of the Arts hosts numerous festivals, performing arts events, and big name acts. Be sure to visit the various art galleries throughout the city featuring a variety of visual arts.

The Saskatchewan Forestry Expo is held every second year with over 200 exhibitors from all across Canada to promote their products and provide information on new technology in the forestry industry. This event will be held in June of 2004.

The new Saskatchewan Forestry Centre is currently being constructed in downtown Prince Albert. This state of the art, environmentally friendly facility is expected to be completed by November 2004.

Prince Albert’s history can be explored by visiting the four main museums, open from the May long weekend to Labour Day; the Historical Museum, the Rotary Museum of Police and Corrections, the Evolution of Education Museum and John Diefenbaker House. There are several other national historical sites throughout the city and area for one to explore.

The community enjoys a rich First Nations history, as well as unique First Nations education and training facilities. There is a progressive First Nations community with 12 bands partnering together to form Prince Albert Development Corporation whose mission is to ‘own and operate profitable business enterprise…’

The residents of Prince Albert enjoy an outstanding quality of life. The cost of living is affordable with the average price of a home being $87,062. Prince Albert is a center that allows its residents to be 12 minutes from anywhere. It is a center that has all the amenities of a larger center with the friendliness of a small town. Accommodations are never an issue in Prince Albert. There are several Hotels, Motels, Inns and Bed & Breakfasts to choose from, ranging from your basic, clean comfortable rooms to executive suites, honeymoon suites and even theme rooms.

If camping is your desire, there is a large RV park within city limits where you can find a full camping experience, then walk a block to find all the city conveniences. Within 10 minutes of the city limits there are three beautiful campgrounds nestled amongst the trees. All of these campgrounds can accommodate the smallest of tents to the largest of RV’s. For your dining pleasure we have wonderful restaurants to meet all your requirements. Whether you are traveling and require a drive-through or wish to take that special someone for a beautiful gourmet meal, Prince Albert’s restaurants are some of the finest.

There are many things to see and do for everyone in the family within Prince Albert. Within minutes of city limits, you can find yourself at one of many lakes. Whether your desire is fishing, camping, resorting, or just relaxing, the lakes of the North can accommodate you.

Visit & Explore Prince Albert! You might find that you want to stay. Prince Albert, a beautiful place to live, work and play!