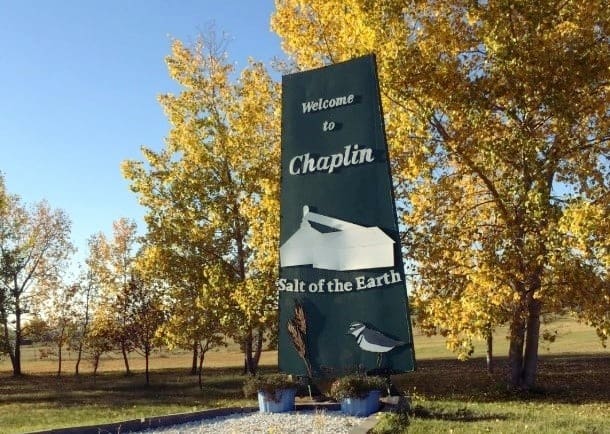 The Village of Chaplin is centrally located between Moose Jaw and Swift Current on the TransCanada Highway (#1). Provincial highway #19 north and Highway #58 south are also important roadways for the area. The Canadian Pacific (CP) rail-line runs through the village and is important to the local industry.

Contents hide
1. Geography
2. History of The Village of Chaplin
3. Economic Information
4. Attractions
5. Other Info
6. Other Information

There is a large salt deposit under Chaplin Lake which envelopes 15 square miles and also serves as support to economic activity in the region. The theory behind the salt is that the salt is brought to the surface from dissolved evaporates from ancient seas one thousand or more metres below the surface. The village is situated within the Missouri Coteau providing habitat for an abundance of wildlife.

History of The Village of Chaplin

The Rural Municipality (RM), Village, and Lake all share the name of Henry Chaplin, a gentleman that came to the area in 1861 to hunt buffalo. The Village served as a coal and water point for the CP Rail in the early 1900s and by 1908 Chaplin was an active community with many services. Native people used the lake throughout history in part because they felt the salt waters had great healing powers. Agriculture was the dominant industry until 1948 when the mining of sodium sulphate began.

Between the RM and Village nearly 500 people live in the area. The Village of Chaplin has approximately 300 people. The region is quite diversified in terms of economic base with agriculture as the main sector in the area with farms producing cereal grains, oilseeds, pulses, and herds of cattle and bison. The agriculture sector has received a boost in the area in part to a new multi-million dollar seed cleaning facility that specializes in the processing of lentils and chickpeas for export.

Saskatchewan Minerals has operated in Chaplin since 1948 and employs approximately 35 people today. Over 400,000 tonnes of sodium sulphate is produced per year and is used in producing detergents, paper, glass, and textiles.

Artemia Canada operates a brine shrimp processing plant in Chaplin and has been in the community for over 30 years. Brine shrimp is freeze dried and used as fish food.

Tourism and birding has been a growing industry in the Chaplin area. Chaplin Lake has been designated a Western Hemisphere Shorebird Reserve due to the number and variety of shorebirds that migrate through Chaplin. Fabrication of metal products is also an important industry in Chaplin as businesses specialize in steel buildings, hopper bottom bins, and other steel products.

The area around Chaplin is becoming known for birding as Chaplin Lake has been designated as a Western Hemispheric Shorebird Reserve. Chaplin’s birding project features an interpretive centre complete with displays featuring themes on migration and the birds, Chaplin Lake in relation to local industry and the association between wildlife and local industry.

Bus tours around Chaplin Lake and observation decks allow visitors to watch some of North America’s rarest shorebirds such as the American Advocet and the Piping Plover along with thirty other species of shorebirds. Since opening in 1997 over 150,000 people have visited the Chaplin Nature Centre.

Chaplin has been host to an annual Sports Day since 1913.

The Chaplin area has also served as a hunting area for people from other parts of Canada and the United States. Upland game, waterfowl, whitetail deer, and mule deer are all hunted in the region.

The Village of Chaplin hosts a skating rink, curling rink, swimming pool, a fully modern campground, and golf course. The Chaplin Community Complex has the ability to accommodate large gatherings.

The Volunteer Fire Department provides firefighting and prevention services to the region.