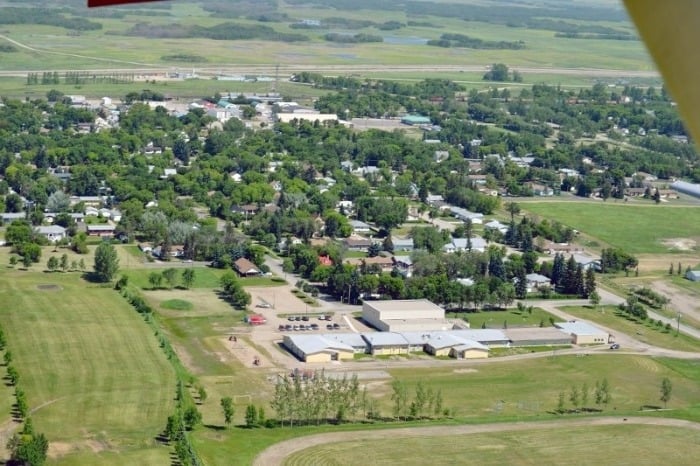 What is unique about Broadview aside from its favorable rail, road, water, land, labour pool, and other raw and supporting resources, is its location. Situated on the Trans Canada Highway, 78 kilometers (km) west of the Saskatchewan/Manitoba border and 155 km east of Regina, Broadview is in the heart of the southeast corner of Saskatchewan. This location gives an excellent advantage to many industries since all major areas are equally accessible from Broadview.

Broadview was originally in the Northwest Territories before Saskatchewan became a province and was designated to be a `divisional point’ by the Canadian Pacific Railway (CPR) in 1882 when the track was built through the region in order for the trans-continental railway to stretch across Canada.

The Town of Broadview is one of Saskatchewan’s older communities, originally established when the Canadian Pacific Railway first reached across the western prairies. A tour of the community would include a few homes that were constructed in that era and remain as prominent structures to this day. The site on which the Town of Broadview exists was established in 1882 as the railway moved across Canada. The first permanent settlement and buildings began in 1883 with a general store, church, rail road buildings, log shanties and many other residences and buildings.

Broadview has a strong native background that is evident even in today’s society. Earlier settlers worked closely with the resident native population to learn the survival skills necessary for them to survive in the area. Plenty of fresh water, fertile soil, ample wildlife and many native berries were among some of Broadview’s attributes passed on to the new settlers from the natives.

There are two possible origins of the Town’s name. The first potential source of the name was when the CPR Superintendent of Construction asked his office staff for a name for the stop and one gentleman suggested that since he came from Toronto-Broadview, he would recommend the name of Broadview and the name was accepted. The more widely accepted version of the choice of a name was related to the fact that Broadview was situated on a wide expanse of unexplored territory.

The native peoples in the area had to traverse many miles across the broad prairie to get wood for fuel. The name was bestowed upon it during the construction of the Canadian Pacific Railway in 1882 when this was the west end of rail and the only view was a vast expanse of prairie.

In 1898 Broadview became a recognized village and the permanence of the community was formalized. The Royal Canadian Mounted Police set up a division in Broadview in 1885 and it has grown to today’s 16-member force in a newly constructed facility. When speaking of Broadview’s history it always begins with the CP Railway, the original native population, and the RCMP.

Broadview became the perfect location for many industries, such as in 1906 when a brick plant was established to take advantage of the clay-like sub-soil. 185,000 bricks from the Broadview area were used in building the Provincial Legislature building.

Water, land, roads, rail, labour, raw materials, location, markets, business incentives and leisure are very good reasons why Broadview is one of Saskatchewan’s leading communities. It provides an industrial advantage to existing and future businesses over competing communities. Commercial and residential land prices are well below the norm.

Broadview also offers access to the Qu’Appelle Valley, `A Saskatchewan Secret’, and the Town provides a service base for the tourism system within the area.

With the excellent road, rail, water and land resources, Broadview is a potential goldmine for future expansion. Broadview has major water resources along with an abundance of available land. Land prices for residential and commercial enterprises are well below the norm, which makes the area very attractive to new development
Broadview has access to high speed internet and the Town also lies within two cellular telephone corridors.

Broadview is very receptive to new business ventures that wish to locate within the community. To assist these businesses, the Town of Broadview currently offers tax incentives which can be negotiated with the Town Council. Broadview offers the support service of Broadview ECDC and the Broadview and District Small Loans Association (small business loans up to $10,000 at 5% interest).

To learn more about potential business opportunities as well as to obtain other economic information about Broadview, please contact the Town Office at (306)696-2533, or visit the Town’s website at: www.broadview.ca

Celebration Park boasts some of the finest baseball diamonds in southeastern Saskatchewan, along with tennis courts, rodeo ground, horseshoe pits, and a children’s playground. The Parks and Recreation Board manage this area, as well as the natural ice-skating and hockey rink. The Broadview Curling Club and the Broadview Golf Club operate their facilities independently. Private recreational facilities include a video arcade, billiard tables, and bowling alley.

From the official opening on July 15, 1972, the Broadview Museum would eventually see more than ten thousand people file through its doors and relive a bit of history as they looked at artifacts and read articles that outlined important dates in Broadview’s history. Within the walls of the museum, you can see Broadview’s mascot (Sergeant Bill) of the Canadian Forces in the Great War, clothing styles of the time period, the general store and the prices of the goods, and sift through thousands of other artifacts that are housed in the museum.

When you walk through the museum grounds, you can visit the old Highland school, the old post office, a Canadian Pacific Railway Caboose or even an Indian log house. In the Highland school you can page through old yearbooks, look at the text books that were used during that time period, or sit in the desk and let history relive itself. The Museum holds an annual Fun Day. The museum is open mid-June to early September.

Treat yourself to the sights and sounds of the old west. Take in a First Nations pow wow while in the Whitewood/Broadview/Grenfell/Wolseley district. See the colorful costumes and traditional dancing by First Nations peoples from across North America and make your trip through the Canadian prairies one to remember.

There are four First Nations bands just a few miles north of Broadview that usually hold pow wows during the summer months. The pow wows are an interesting diversion near to the TransCanada highway and routes through the reserves lead through the glorious Qu’Appelle Valley.

Carved by glaciers some 14,000 years ago, Saskatchewan’s Qu’Appelle Valley is home to three very popular provincial parks which include Crooked Lake, Echo Valley, and Katepwa Point. Crooked Lake, 20 km north of Broadview on Highway 201, is situated in a scenic portion of the Qu’Appelle Valley characterized by mixed grass prairie interspersed with groves of trembling aspen and patches of burr oak.

Wildlife photographers will discover a multitude of bird species and a variety of prairie mammals including ground squirrels and deer. One of the smaller lakes in the Qu’Appelle Basin, Crooked Lake offers a variety of watersport opportunities, made accessible by a boat launch. A suntan is almost guaranteed at lakeside campsites, a large sandy beach, change house and convenient picnic sites that are found in the core area of the park. A privately operated golf course and resort is located nearby.

Last Oak Golf & Country Club is owned and operated by the Cowessess First Nation band. Set in the beautiful Qu’Appelle Valley about 25 km north of Broadview, Last Oak is a full length 6558 yard championship level course. Worth going out of your way to play, Last Oak easily earns the title of a `hidden treasure’.

One hundred and twenty meters below the level of the prairie lies a Saskatchewan secret. A hidden valley that’s enchanting and beautiful. With a drop of 120 meters(400 ft.), the Qu’Appelle Valley is the best spot for hang gliding from Ontario to the Rockies. The unique landform that makes the valley such an appealing place is the reason for its suitability for hang gliding.

An abundance of steep hill-faces provide ideal launch areas. Air currents heated on the valley floor spiral upward allowing the gliders to stay aloft for long periods of time. Enjoy prairie wildflowers, many varieties of trees, a colorful and peaceful tapestry of sparkling waters, lush meadows and parklands as you glide across the `hidden valley‘.